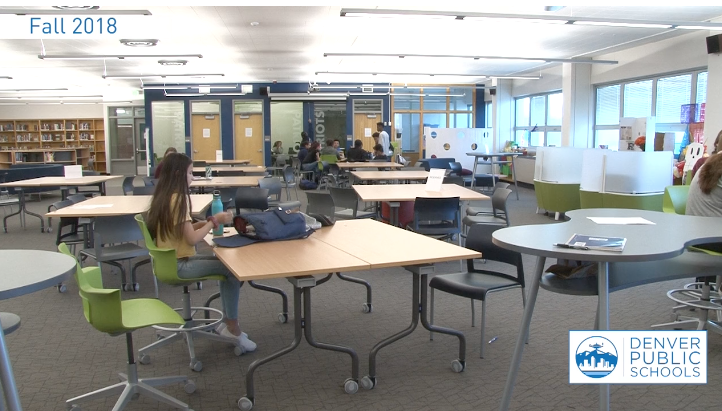 At George Washington High School, there’s been a glaring change – a bright one at that – from spring to fall of 2018:

“Well the windows make me really, really happy,” said Maryrose Cohan, who teaches speech and debate at GW. “I think it makes all of us feel like we’re being supported.”

Those windows were a major frustration for Cohan – and several others at GW – for years. In a previous interview in Spring 2018, Cohan said the windows were so old they would let in too much cold air, leading to fluctuating temperatures across the campus that disrupted the learning environment. The brown blinds were also quite unsightly and often didn’t stay locked in position.

“The upgrades make the school look cleaner, which makes for a more positive environment for students to learn and teachers to work,” Cohan said.

The new windows were part of a larger set of renovations at GW – including spruced-up STEM labs, new student athlete locker rooms and a refreshed library – completed between spring and fall 2018. They make up community-identified Focused Investments happening across Denver Public Schools, which began in summer 2018 as part of the $572-million 2016 DPS Bond.

The library wins the most accolades from students, who raved about a layout more conducive to effective studying and group collaboration.

“There really was no place, including the library, that could really accommodate our work schedules,” said junior Khalid Mohieldin, “and now with the renovations, I think it’s really improved because it’s just so much better of a work space.”

For GW senior Henry Waldstreicher, the new study rooms have become his go-to place for “hunkering down and typing out papers” at the end of the school day.

“I love the study rooms. They’re absolutely incredible,” he said. “I don’t have to go to a coffee shop or hunker down at home. This is so much better!”

For junior Meredith Neid, who is on the swim team, the biggest improvement is something she sees before and after every practice: the women’s locker room.

“Before, we had to kneel or crouch down to take a shower, because they really were designed at a time where it was assumed girls would only need a sponge bath,” she said. Following renovations, “We have a team room now, so it fosters that sort of community. [And] our showers go over our heads, which is really exciting!”

Visit bond.dpsk12.orgto learn more about how the Denver voter-supported 2016 DPS Bond is improving school environments across the city.